A Word About Chiggers 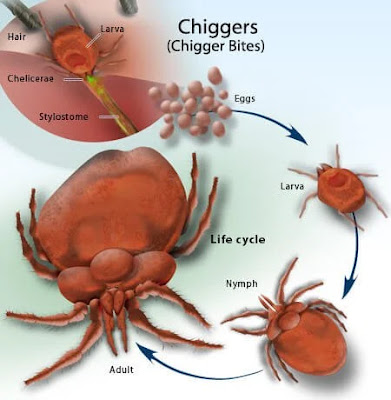 Chiggers are a family of mites who are a member of the Trombiculidae Family, which is part of the Arachnid or spider family. They can afflict human beings, and can afflict birds, rodents, dogs, and horses.  In the US, these are most often found in the Southeast, the South and sometimes in the Mid-West. Canada used not to have chiggers, but the latest literature says that Southern Ontario now does. One reference says that they can now be found worldwide.  Most often they are unseen, but occasionally they can be seen as extremely tiny black or red dots.

Human beings don't generally feel their bites, but once a chigger larva bites and burrows, he extends a tiny tube or a stylostome in order to extract body fluids for nutrition. Often we are bitten by more than one at a time. They like folded and damp areas of skin like the groin, the ankles, the axillae, behind the knees, and under the belt region. The chigger's saliva causes a reaction for us, and even after the chigger has fallen off, we are troubled by significant and intense itching in the area. The itching can be so intense that we may not be able to sleep. Although the issue is ultimately self limiting, it can be very annoying. 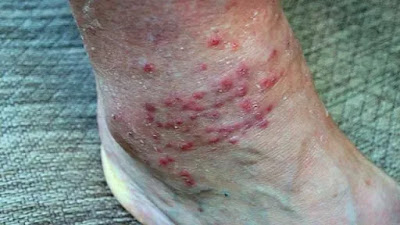 This is a rather typical appearance of chigger bites.

A few years ago, a physician friend of ours got chiggers from her husband who had been golfing, and then even after a shower, brought the chiggers home to his wife where they both suffered for a few days.

There is a commercial preparation called Chigger-rid which is available in the American South. What I usually do for chiggers is take a 2x2 gauze pad and wet it with Hydrogen Peroxide 3% and then scrub the regions of obvious chigger damage. The centers will fizz and usually this will help the small wound to resolve more quickly. It also seems to help with the itching. Some lesions will need a second or a third cleansing.   Others find Calamine or ice to be helpful.

We used to believe that chiggers were simply a summer annoyance and that it was a sign that we hadn't been as careful as we should have been in very deep grass or woodland areas. However, since we had a mild winter here, it has been a banner year for chiggers for almost everyone. Chiggers can also afflict your horses and dogs, and they can lead to enough scratching that a local infection can occur. One of my horses was afflicted this year and this was such a discomfort to him that it adversely impacted his eating and required treatment.  The literature also discusses a dog who developed serious neurologic problems following a chigger infestation.  We also know that some types of chiggers can spread scrub typhus. (I have placed a link below on scrub typhus) The antibiotic doxycyline is sometimes used for humans or animals who have been infected by chiggers and ticks and who are now febrile.  It is possible that chiggers can spread other tick borne varieties of illness and that this is simply not yet known.  So it would be wise to see a physician if you have a bothersome cluster of chigger bites and then develop a fever. 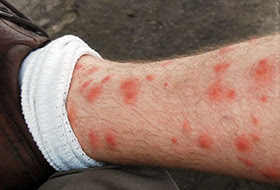 Chiggers may also look like this. Some people have particularly sensitive skin in which the area of induration may be much broader than in the earlier pictures. (Picture courtesy of webmd.com)

Posted by JaneofVirginia at 9:17 AM No comments: