On Chemical and Radiologic Weapons


When Alexander Litvinenko was poisoned in London at a tea house with polonium that could only have come from the Russian government or military, people were shocked and upset. When Litvinenko fell ill and was hospitalized, and polonium was eventually discovered as the cause, law enforcement and the medical establishment realized that not only was a man poisoned and murdered, but a swath of innocent people in a foreign land were exposed as well. Everyone from the people in the plane that transported the polonium from Russia, to those in the tea house, those in the tube train, those walking down to street, in addition to the physicians and nurses in the hospital, were all exposed. This is why such an action should not be forgotten. Litvinenko was actually a British subject at the time of his killing. Whomever killed Litvinenko didn't care that citizens in another land might die as well.

Two weeks ago, Kim Jong Nam, the elder brother of North Korea's leader Kim Jong Un, was similarly murdered.  VX Nerve gas has been found on his face and on his eyes on autopsy. Four presumed North Korean agents are said to have placed the VX on his face as he walked through the airport in Kuala Lampur in Malaysia. Minutes later he died in an ambulance on the way to a hospital. One of the attackers began vomiting presumably due to exposure to the agent, despite the fact that she tried to wash it off her hands in a bathroom.

Since Kim Jong Nam was actually the elder brother, and had wanted to ease toward democracy in North Korea, had he ever become it's leader, his father, Kim Jong Il, decided to make Kim Jong Un his successor. The elder Kim Jong Nam was a close as North Korea would ever have had to a reformer. His father had wanted this beloved brother to be left alone. Kim Jong Nam therefore spent a lot of time in university in Switzerland, and learning about technology. Most recently he was living in China and took fairly frequent trips to Malaysia. He traveled often and was the father of a number of children.

Once again, N. Korea, strongly felt to be the body who ordered this hit, thought nothing of exposing those in a foreign land to the most dangerous chemical weapon known to man. This should have implications for any nation that had even polite relations with N. Korea.

A new dimension to terrorism has begun. The use of chemical and radiological weapons as a means to completing a hit have been acceptable now to two nations. Such actions, if continued, are likely to impact the innocent as well. VX can be delivered to thousands in a number of ways.  Neither of these killings should be forgotten. Such weapons exist and there are those on Earth who will not hesitate to use them.

Posted by JaneofVirginia at 8:46 AM No comments: 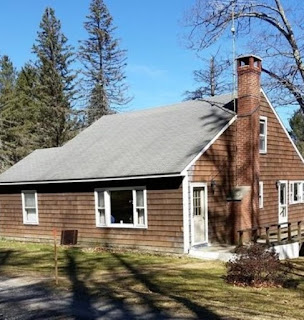 A lot of people know that Idaho, or a state known for having a lot of forest and rural lands might be a better choice as a place for a survival home, but they are tied into the Northeast with friends, families and jobs. In addition, land can be very pricey in the northeast, as can property taxes. I wanted to post this for those of you in such a situation.

This is 90, Sunset Ridge in Norfolk, Connecticut, 06058,  which is in Litchfield County.

This property is on 38 deeded acres, but should be resurveyed, as it could be slightly more or slightly less.


Three Bedroom, 1 Bath home on 38 acres. A diamond in the rough, this property is tucked away down a private drive yet within walking distance to the Norfolk Village center and the Norfolk Library, Infinity Hall, the Yale Estate as well as within walking distance to Norfolk’s ballfield and Toby Pond. Norfolk, CT, is located in the Litchfield Hills and close to the Berkshires, Appalachian Trail, Wassaic train station and the Farmington and Housatonic Rivers that boast wonderful fly fishing. It also has a Haystack Mountain view. There is also a detached garage.


This permits a family to have land, security and some gardening potential, while remaining in the Northeast near family, friends and familiar health care.

Please do your due diligence and check zoning laws to ensure that your plans for such a property are in keeping with the planning department of the township, county and state.  The property taxes are over five thousand dollars a year, which is quite typical for many homes in the area, even those without acreage.

Posted by JaneofVirginia at 4:47 AM No comments:

Once again, I have no financial interest in this or in any other property for sale by Survival Realty. However, depending upon where you are living in the US, this is an excellent buy. It is South of Richmond , Virginia in a rural area off Interstate 95.

The information between the two set of undulating lines is the work product of Survival Realty.

Private Oasis on Over 47 Acres!

Your private oasis awaits! Sited on over 47 acres, this custom-built retreat offers 3,100 sq ft in the main house with stunning open concept and no detail spared. Step inside the spacious foyer and be greeted by beamed cathedral ceilings, a breath-taking cypress vaulted front wall and many windows, illuminating the craftsmanship and detail throughout. The beautifully designed kitchen offers granite counter tops, tile backsplash, tin ceiling and state-of-the-art appliances.

With over ten years of powerful negotiating skills as a multi-million dollar producer, it is my mission to help you reach your desired real estate goals efficiently, effectively and with utmost profit. I specialize in urban, historic and waterfront properties, but am able to assist in any market whether it is investment, suburban or even commercial properties. Knowledge is power and I am committed to knowing and understanding our current market conditions so that your goals can be reached. In addition to powerful negotiating skills, I pride myself on customer service, attention to detail and forming life-long relationships with my clients. Please use my Website to access powerful features such as the access to the MLS through my MLS Wizard. Selling your home takes special care and attention in order to get the highest possible price and you can feel free to use my Value Wizard to get an instant comparable sales report. My links section is designed to point you to important information on home shopping, owning and selling. If you cannot find the information you seek, contact me and I will do my best to get you an answer or point you to a resource.


Posted by JaneofVirginia at 3:57 AM No comments: